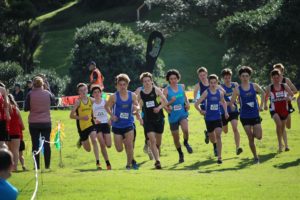 Athletics Auckland hosts events over Cross Country and Road from April till September. Events are held all over Auckland. All Auckland events are are held before the Athletics New Zealand Championships.

The Grand Prix Series will this year be held over five events with four being Cross Country and the final event being the Road Championships. Athletes collect points based on their performances across the series. GP Series Details and Rules

A Winter Race Walk Championship is held and is typically held with the Athletics Auckland Road Race Championships.

A beginners guide to Cross Country 2022

Athletics Auckland organises a series of inter-club cross country and road racing through the winter each year (May to September) for all age grades, Juniors to Masters. It’s called The Grand Prix Series.

All in all, the series is four cross country events and the road race championships at the end – so six events in total. It’s a chance to get regular racing against some of the top runners from the other clubs in Auckland and it’s a lot of fun. Races are split by age category. Juniors race from 2k for the Under 8s up to 8k or 10k for the seniors. The events are professionally marshalled and run under World Athletics rules.

How the series works

You pick up individual points as you compete and there are overall league tables for your performances across the whole series. There is also a teams event and two of the races double up as Auckland Championships for Cross Country and 10k Road.

The series gives you a chance to race regularly and is great for your fitness and athletic development. Cross country is a hard workout which can be integrated into your overall programme. Many of our club legends (including Peter Snell, Murray Halberg, Jeff Julian, Dave Sirl, Martin Simmons, Kevin Ryan, Rex Maddaford) in the past used cross country to develop strength to set themselves up for road and track later in the year. If you haven’t had much racing experience, it is a great way to learn. You train as a team, run as a team and learn from each other, building up friendships and rivalries through the winter.

This year the first race on 14th May at Barry Curtis Park will be run in a new format hence no GP Points but will be part of the Season Entries.

It’s an all rounder’s course with some open fast running on the playing fields and some more technical (muddier), steeper bits as well. Pakuranga has a bar where you can grab hot chips and a drink and share some war stories after the race.

As well as competing for individual points in the Grand Prix series, you also gain points for your club so you run as a team. It is a bit like the American NCAA races. If you win your category, you get 1 point. If you are 2nd, you get 2 points. The team with the lowest overall score wins. It’s great fun. Every position for every runner counts.

Auckland Cross Country Champs will this year be held over the Showgrounds course at Pukekohe.  Known as a “true cross country event” meaning it’s got hills, longish grass and often a bit of mud.  As well as competing for Grand Prix points, the Auckland Cross Country titles are at stake so fields are usually stronger for this race. Auckland representative teams for the National Cross Country Championships are selected here so it’s an important race if you want to compete at the National Champs which are in Taupo this year on the 30th July.

The Long Bay course is well-drained with a sandy base so it’s dry and fast. It’s also short – usually 4k for the senior grades. This is the course to show off your wheels and your sprint finish. It’s also right on the beach – so why not make a day of it, and go for a walk or an extended cool down jog after?

The Grand Prix Series finishes with the Auckland Road Champs. Venue TBC. Distances are 2k for Under 8s through to 10k for seniors and masters). Again, the Auckland Road Race titles are up for grabs as well as selection for Auckland representative teams for the NZ Road Champs (4th September at Upper Hutt, Wellington).

So, rev your engines, sharpen your spikes and get racing this winter!

Thanks to Owairaka Athletics Club for the great guide for all athletes!

The Athletics Auckland Selectors attend each Centre Meet across the calendar prior to Team Selections.  Special consideration will be given to performances at the Auckland Cross Country Championships.  Athletes are selected for U18, U20, Senior and Masters grades. The 2022 Championships are being held in Taupo.

With the limited Road season the Athletics Auckland Road Race Championships are the major selection trial. Athletes are selected for U18, U20, Senior and Masters grades. The 2022 Championships are being held at Upper Hutt, Wellington.